There’s a common urban legend that says soda can kill a rat. Rats aren’t able to burp but there’s not enough carbonation to affect a rodent, says Tim Husen, a technical services manager with Orkin.

“There simply wouldn’t be enough carbonation to affect a rodent,” Husen said. “Using Coca-Cola or another soda as a control tactic is not a recommended strategy. Instead, you may unintentionally attract rodents to your home, as they are attracted to sweet, sugary substances as a food source.”

Caffeine is certainly harmful for rats, too, but a rat would have to drink near a full 12-ounce can of soda to have serious consequences.

This plays off another thought that people are never more than 6 feet away from a rat, which is simply impossible. The myth comes from a study published in 1909 in England. W.R. Boelter conducted the study and came up with a guess that England had one rat per acre of cultivated land. England had 40 million acres of cultivated land and a population of 40 million at the time so it kind of fit that there’d be one rat to every person.

In 1949, Dave Davis studied the rat population of New York City and determined that there were really about 250,000 rats in the city—a ratio of one rat for every 36 people.

Rats are rarely aggressive. While rats may get into squabbles with fellow rats over territory or food, rats rarely become aggressive toward humans, unless they are provoked.

Despite what you’ve likely heard, rats didn’t cause the Bubonic plague. While rats can carry some diseases such as rabies, rats aren’t responsible for causing the plague, which killed millions of people worldwide over several centuries. Fleas infected with the plague spread it as they found different hosts.

Of course, the concept of what makes a good pet is all a matter of opinion, but some people find rats make ideal pets because they are easy to care for and they are quick to train. Rats are also intelligent, take up little space and don’t require as much money for upkeep.

Rats can surely be a little dirty, but they aren’t any dirtier than other animals. If you have one as a pet, you’ll find that a rat’s personal hygiene is on par with that of a domesticated cat or dog.

Rats Eat Anything and Everything

A rat isn’t a living garbage disposal. Rats are like any other animal in that they certainly have preferences when it comes to food. For those who keep rats as pets, rat nutrition is a hot topic as rats can suffer from diabetes and obesity, just like cats and dogs. Rats will eat grains, seeds, nuts, fruits and vegetables in the wild, as well as smaller animals and insects. They’ve been known to each trash, compost and pet food, too. 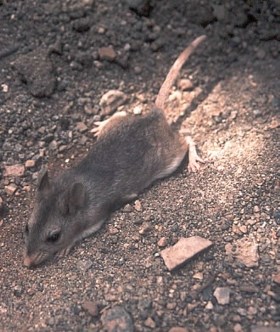 Rodents. You think you know them, but do you really? Or are you holding on to fictitious beliefs rather than facts?

Comprising 40% of mammal species, rodents aren’t just composed of mice and rats; they also include squirrels, guinea pigs, hamsters, gophers, beavers, gerbils, porcupines, and chipmunks. (But since mice and rats are the most common rodent pests, we’ll focus on them in this article.)

Humans have long considered rodents to be pests, and we’re still struggling on how to deal with them today. It can be frustrating to get rid of them, even more so if your solution is based on a myth. So, let’s debunk the most common rodent myths asap!

Here are five myths about rodents that you should eradicate right now:

Myth 1: Cats will take care of your rodent problem.

The truth: Unfortunately, cats aren’t very effective at eliminating rodents, specifically rats. A study funded by the National Pest Management Association (NPMA) found that cats don’t successfully kill and control rat populations. The researchers observed that “less than 1% of cat and rat encounters resulted in a rat being killed; despite stalking behavior being observed 20 times.”

Scientists also found that, indeed, when the cat is away, the mice—in this case, rats—will play. For every cat sighting, the researchers observed, rats were nearly 20% more likely to move toward a shelter. But while the sight of a cat might get rats hiding initially, “the rodents will patiently wait them out and return undeterred once the cats lose interest and leave the scene.”

The truth: Despite what “Tom and Jerry” and other cartoons might have us believe, mice—and other rodents—aren’t tempted by cheese.

A 2006 study found that a mouse’s diet consists primarily of grains and fruit. So if you’re thinking about what to put in that mousetrap to attract mice, Procter Rodent Control, a family firm which has been producing Britain’s best-selling mousetrap since 1897, suggests peanut butter and chocolate.

Myth 3: Rodents eat anything and everything.

The truth: Sorry, but rodent’s aren’t nature’s living garbage disposal. Like humans, they do have a diet, and it consists of what can be found in their environment.

In a 2018 study, researchers studied the bones of rats and found that those living in the city had “a higher-quality and more stable diet than rural rats did,” while rats in the country ate whatever food they could find—confirming Aesop’s “The Town Mouse and the Country Mouse” story.

“Rats are really interesting, because their diets are a reflection of foods people leave lying around,” said Eric Guiry, an archaeologist at Trent University in Ontario and lead author of the study. For example, city rats ate a lot more meat than rural rats.

Meanwhile, homeowners might mistake chewed up books, papers, wires, and insulation as getting eaten by mice. But in reality, female mice use these shredded materials to build a nest.

Myth 4: Rodents that ingest poison get dehydrated and go outside to look for water.

The truth: Rodent baits, or rodenticides, can take effect as quickly as two days or up to 10 days, depending on how fast-acting or lethal it is. The poison works by reducing the rodent’s blood-clotting ability, which damages its capillaries and causes internal hemorrhage. So the rodent dies of internal bleeding—not dehydration—but the delay can mean that the rodent can die in its nest, inside your property or outside.

Myth 5: Seeing rodents during the day means you have a rodent infestation.

The truth: While rats and mice are nocturnal, that doesn’t mean they don’t come out during the day. These rodents are just so good at keeping out of sight that you might only notice a mouse or rat scampering in your house or commercial building when there’s already a severe infestation. Telltale signs of rodent infestation include droppings, stale smells, chewed holes in walls or floors, and shredded materials.

Don’t let it come to this!

Now that we’ve debunked myths about rodents, you’re one step closer to getting rid of those pesky rodents more effectively.

Don’t wait for a severe infestation. Contact us to schedule an appointment today.